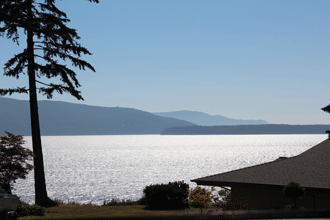 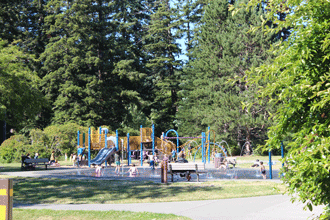 The Edgemoor Neighborhood is on the southwest edge of the City of Bellingham and is home to about 2000. Here you’ll find many of the city’s premiere bay view homes, with views that change with the weather and the seasons. These homes range from those built in the 1920's to those built today. Many are large, beautifully designed, water view homes, perched on the bluff with large lots. Others may be smaller and tucked back into the forest in a quiet setting all their own.

Edgemoor is just south of the Fairhaven Historic District and its historic buildings and its many boutiques, shops and restaurants. Many Edgemoor homes overlook Fairhaven and its waterfront. From here, a quick bike ride can bring you right to the center of Fairhaven.

Edgemoor is right next door to Fairhaven Park, a large park with a large children’s play area, tennis courts, many walking trails and large open space.

Edgemoor is the only neighborhood in Bellingham to have a community swimming pool. The Bayside Pool is in constant use in the summer months with swim lessons, swim team practice and community events.

Much of Edgemoor is situated on Clark’s Point, a peninsula that juts south into Chuckanut Bay. Houses on the Point can have either a western view of the San Juan Islands or a beautiful view of Chuckanut Bay and Chuckanut Mountain in the background. The heavily forested southern end of Clark’s Point is protected from further development with a conservation easement.

This neighborhood is also home to the Lairmont Manor, an elegant home designed in the Italian Renaissance style. When Lairmont Manor was built in 1914, it was considered one of the most exquisite houses in the Pacific Northwest. Today it’s on the National Registry of Historical Sites and is owned by a non-profit group. Lairmont Manor hosts many musical and cultural events throughout the year and has been the site of thousands of weddings.

Edgemoor is home of the one of the city’s four middle schools. Fairhaven Middle School has been on this site for nearly 100 years, though for many of its early years was the home of Fairhaven High School. Beautifully remodeled in the mid-1990s, it maintains vestiges of its early twentieth century beginnings, while being a modern, state-of-the-art building that sits on about 13 acres.

newest HOMES FOR SALE IN EDGEMOOR

Close to Bellingham amenities while maintaining privacy, this Edgemoor home is available for the first time! This well- maintained home offers an open layout; great for e...

1988 quality built custom home in the heart of sought after Edgemoor. The condition and the design will make this house easy to update. Privately situated with scenic ...

One of Edgemoor's rare and most breathtaking lots, with spectacular views of the Chuckanut Bay, Bellingham Bay, the Olympics and the islands. If you are looking to build ...

Offered for the first time since its construction, this multi-generation estate features midcentury architecture and high-quality functional design. The home is set back ...