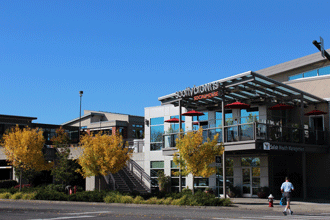 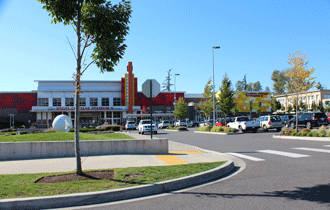 Although the City of Bellingham named this neighborhood Mt. Baker, it is more widely known as Barkley. The Barkley District and the Mt. Baker Neighborhood is a great gem to be discovered. There’s a large variety of city and bay view homes and condos, both large and small. As tree lined Barkley Boulevard winds away from Barkley Village and up the hill, you pass the entrances of several neighborhoods and developments. On the lower portion of the hill you can find moderately sized and priced homes. Nearly all these neighborhood side streets dead end at a greenway where there’s a pathway that winds through the neighborhood. Further up the hill, and near the top of the ridge, there are many beautifully designed and crafted homes with sweeping views of the bay and city. At the end of these side streets, and across the top of the ridge, is the largely undeveloped Northridge Park. Northridge Park conserves several dozen acres of the forest that formally covered the entire ridge and provides a pathway through the forest for both people and the forest wildlife.

The Barkley Neighborhood is a great example of what a new, well planned northwest neighborhood should be. Beautiful homes, close to greenways and paths that are all connected to the larger trail system that takes you directly to shopping, schools, destination parks and to other neighborhoods. From the end of your street you can walk to Whatcom Falls Park, Barkley Village or halfway across town without walking along a city street or sidewalk.

The Barkley Neighborhood is home to Regal Cinemas as well as two large shopping centers, both of them with large grocery stores and numerous restaurants and shops.

Shopping and Dining at Barkley Village

Shopping and Dining at Sunset Square

The Barkley Neighborhood has several new schools in its midst. Many neighborhood kids attend Northern Heights Elementary. Northern Heights is a wonderfully designed school that opened in 1998 and is known for its innovative and dedicated teachers and staff. Most of Northern Heights’ students live within two miles of the school. Some of the kids on the south side of the neighborhood attend Roosevelt Elementary School. Roosevelt is an easy bike ride on the trail for many of these kids. Middle School students attend Shuksan Middle School, and Whatcom Middle School. High school students attend Squalicum High School. Squalicum is the newest high school in Bellingham and is on the northern edge of the Barkley Neighborhood.

NEWEST HOMES FOR SALE IN BARKLEY

Popular Restaurant in Barkley District in Bellingham across the street from the Regal Cinema's Multi-plex, Hundreds of employees in the area with the Bellingham School Di...

BRAND NEW CONSTRUCTION home in a quiet neighborhood at the end of a dead-end street. Quick walk to Barkley Village, trail access and located in the Squalicum school dist...

High-Density Residential building lot in a thriving neighborhood. This zoning has no maximum density, making it ideal for apartments or condo units. This is the perfect p...

Courtesy of HomeSmart One Realty

Listing courtesy of HomeSmart One Realty.